The final project to be done at Critical Hit 2014 was, after having spent four weeks making four completely different game protoypes, to pick one of the prototypes and to turn it into a polished game. We picked  Week 3’s prototype, Red-Handed, a stealth game with no fighting mechanics.

In Red-Handed, the player incarnates a fox  spy who is sent to an enemy wolf’s military base on an isolated island. The Spy’s goal is to sneak among the other soldiers, eavesdrop, and sabotage the plans of his enemies. However, when they are spotted by soldiers, instead of fighting their way out (like in other stealth games like Metal Gear Solid or Mark of the Ninja) the player is questioned, and they need to try answering the most appropriate answer in order to smooth-talk their way out of this situation.

However, they need to make sure that the fox’s heart rate doesn’t get too high, lest they’re stuck in place until the fox catches his breath. Unfortunately, time is of the essence, as the players have a very short time to complete their mission.

The week-long prototype was initially made for the weekly theme of Unusual Controllers, and as such Red-Handed was initially meant to have uncomfortable control schemes; directional buttons made of conductive dough and an ultrasonic sensor were used to move the fox and make decisions. By holding the hand over the sensor within different thresholds the fox would move, stop, or choose options.

The polishing phase completely removed the odd controller, and instead replaced it with an Xbox 360 controller. Initially, we used the left and right triggers of the controller to control the pace at which the fox could walk, as well as to maintain his composure when he was questioned, lest his heart rate would spike. If the fox’s heart rate was too high, the dialogue interface would spin and make the answers vanish, as if he were blanking out.   To add further feedback, the controller vibrated with the fox’s heart beat.

However, playtests prove that the interface was overwhelming, and polarized the testers–either they loved the experimental vibe to it, or they were exasperated by the complicated interface and complicated control scheme. 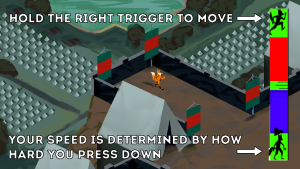 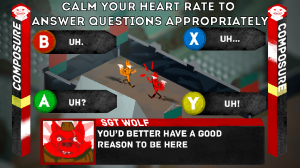 Li Zhi and I had to rethink the user interface and control schemes multiple times, and ultimately we settled for a less overbearing interface. 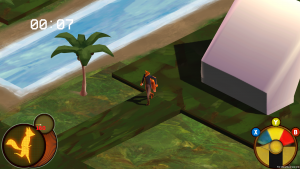 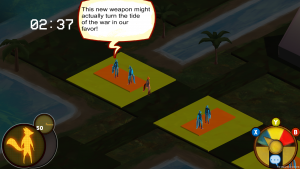 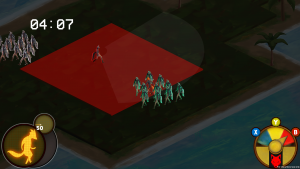 The major challenge of this game was the sheer amount of information the players needed to access at all times; the fox’s pace–if the fox is too fast or too slow he could rouse suspicion–as well as his heartbeat–if his heart rate reached 200 beats per minute they would be winded and paralyzed, losing time–and his objectives, as well as being able to eavesdrop on enemies and to see which zones are most likely to get them noticed if they trespass.

The dialogue interface has been revamped as well,and an extra interface allows the players to decide how to sabotage their targets. 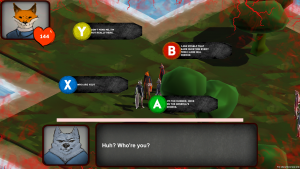 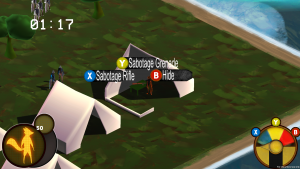 The final project was presented at Google Montreal on August 14th 2014.